Scattered around my home are many small journals. They're on shelves, stacked on end tables, and they fill various drawers and cabinets. Within them are my notes on the bad films I watch late at night, scribbled in the dark. They're mostly illegible, written in a shorthand I often struggle later to decipher. I try my best to finish the reviews, but sometimes one will slip by me. This is one of those reviews. 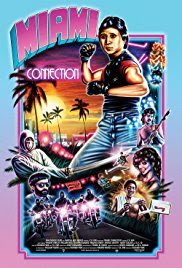 In a city where everyone seems to know martial arts, dudes sit around and wait for a nighttime delivery. Ninjas approach. Surprise! They're delivering drugs, and it's not very surprising. Suddenly, a henchman gets a throwing star stuck in his neck as a repetitive synth soundtrack plays. Disposable extras appear on motorcycles, resulting in a terrible gun battle and sword fight. A band named Dragon Sound consisting almost entirely of John Oates lookalikes performs shirtless with Linn drum.


A classroom of students at a community college begins programming CPUs as big as a microwave oven, and meanwhile, an unconvincing rumble in the school's parking lot is averted through terrible dialogue. A shouting match at a nightclub ends abruptly. Back at the ninja hideout, ninjas practice ninja stuff, then everyone has lunch. Dragon Sound performs another song with pyrotechnics about ninjas in a style reminiscent of Pat Benatar, which should annoy Pat Benatar.


Carloads of men yell at one another and wave sticks around. Shirtless guys in a room decorated by an inexplicable Leif Garrett poster argue over a letter. Then everyone goes to the beach, gets pelted by shoes, and unappetizingly make out. Back at the community college, people spar in slo-mo. After someone gets their nose pinched by toes, everyone enjoys a Pepsi.

Some guys try to dine-and-dash, and then revealing short shorts and camera shadows make an appearance. After breakfast and more mail, a boom mic appears. Then ninjas run across a bridge.

In the rock'em-sock'em world of Miami Connection, Florida seems soley populated by 40 or 50 male characters and one woman, and they're all martial artists who practice an amusing form of martial arts that always defeats someone with a weapon. Featuring terrible acting, a terrible script, terrible music, terrible cinematography, terrible lighting, and terrible fight choreography, Miami Connection is pretty terrible, and it appears to be made up almost entirely of montage.

Attack Of The Mushroom People 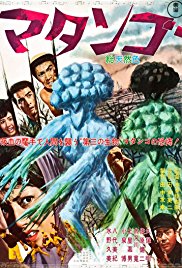 What does that have to do with Attack Of The Mushroom People? Nothing, really.


Just thought I'd throw that out there. Cut to film.

A man is locked away in a psychiatric ward, and he is our narrator, which isn't a good sign. A young woman sings aboard a boat backed by green screen, then the boat hits some rough seas, and then it cuts to smooth sailing. After some turbulent, Gilligan's Island-like ocean footage, people seem to manage playing cards below deck in spite of ship-sinkingly dangerous waves. Piloting the ship is a fellow wearing sunglasses. A female says she's seasick, which prompts someone to decide that's a good enough reason to turn back despite the obvious typhoon.

A giant steamer heads directly toward the tiny ship. Someone weakly waves to try to stop the inevitable collision, but alas, it was just a dream. Finally, lost and adrift without a mast, the castaways discover land. Leaving their boat, they all bellyflop into the beach, as one does when one reaches the shore of a deserted island.

After eating a suspect berry and finding a tiny pool of water, they run slowly along the foggy beach and discover a shipwreck that's just crawling with fungus, which they promptly get all over them. Some half-hearted scientific inquiry follows, where radioactivity is briefly discussed. A giant mushroom in a box is discovered. Sunglass guy goes below and sneakily eats Spam.


After tons of movie, a mushroom person finally appears, shuffling slowly down the hallway toward them. Cut to next morning, and they all claim it was a ghost. Then everyone bickers.

More movie happens, with zero mushroom people or attacks by them. The castaways argue over canned goods.


Mushrooms grow at great speed with dramatic music accompaniment. After a long walk in the rain, someone is talked into eating mushrooms, then showgirls do flips. It's fairly psychedelic, and it's a welcome change of scenery from jungle foliage and button mushrooms. Finally, someone is chased by mushrooms. It's not very interesting.

The mushrooms attack, and it's exactly what you would expect; lots of shuffling and an over-abundance of dusty spores. Someone loses an arm. A few of the mushroom people look like broccoli. The victims take on an appearance of half-human mushroom hybrids. I'm suddenly hungry for stir-fry, or maybe a nice pasta.

A vegetarian chicken substitute would work fine in that recipe, JSYK.

Attack Of The Mushroom People is pretty boring until last last few minutes of the film. Mushroom enthusiasts would be wise to skip right to the bonkers ending.