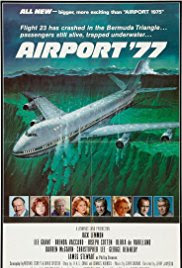 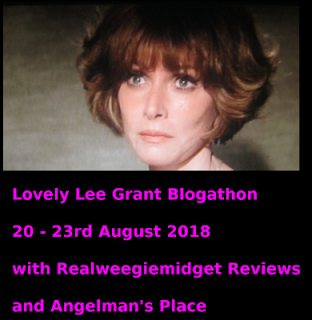 Thanks so much to Realweegiemidget for inviting me to take part in this Lee Grant blogathon, although I was reluctant to participate. Longtime readers of my blog will know that I focus on terrible films, or documentaries that explore various subjects in Forteana. Glancing briefly at Lee Grant's filmography, I would be totally out of my element, considering she has been nominated for an Academy Award four times (winning for Shampoo). As far as I can tell, she has never appeared in a film where she is shown crouched behind a boulder in the woods searching for Bigfoot, although she did once get attacked by killer bees.

Ooh, I'm going to have to bookmark this one for later.

My fears were proven misplaced. Case in point: Behold her appearance in the Bermuda Triangle-themed disaster film Airport '77, which fits at least two of my criteria for review, one: the fortean phenomena of The Bermuda Triangle, and two: Airport '77 is pretty darn bad.

A star-studded, sideburned, Dry Look-ed, disaster extravaganza, Airport '77's complicated plot involves the heist of several paintings and other valuables stowed in the belly of an improbably huge plane, as the crooks attempt to steal these items through the use of costume changes, toupees, and knockout gas, which causes the plane to crash into the Bermuda Triangle.

An improbably huge 3-story jumbo jet filled to bursting with Rembrandts, vintage wines, and antique autos warehoused in its cargo hold, this plane is outfitted with offices, a surprisingly turbulence-proof and chockful-of-breakables lounge area, unseen-but-mentioned sleeping rooms, a laserdisc player, and a table-top Pong video game. Could a plane like this exist? Could it manage to get off the ground? I don't know, and I don't want to do the research to find out. Don't @ me, because I really can't be bothered to care.


Standing out amongst a crowd of stars, one really can't stop watching Lee Grant, and she devastates everyone in eyeshot with more than a few withering glares. It's obvious who the queen is on this flight, so you'd better watch yourself Olivia De Havilland. Ms. Grant is impeccably pantsuited, and brooched within an inch of her life. She requires one brooch on her outerwear, and one brooch underneath. 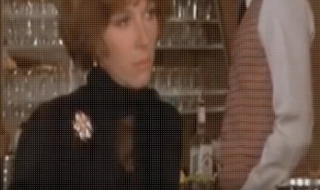 Mrs. Deathrage commented that this film resembles a 'QVC in the skies'.

Air traffic controllers lose radar contact with the flight, which results in someone tapping the glass screen of the radar (if I recall correctly, this often was a logical fix with cathode-ray TVs at the time), and shrugging their shoulders because, 'Well, they're in the Bermuda Triangle', and that sort of thing often happens with flights, I guess.

During the painting theft, where the thieves choose between which priceless masterpiece they'd rather burgle with no real place to go, the plane seems to skim across the surface of the ocean in some rather convenient Bermuda Triangle fog, and the plane clips one of those smack-dab-in-the-middle of the Bermuda Triangle oil rigs. The plane's engines flame out, causing someone to crash through plate glass, someone else to fall down the jet's spiral staircase, someone else to get steamrolled by a grand piano, someone else to fly through an intricately carved wooden partition, and someone else to get beaned by a champaign chiller, resulting in some unintentional hilarity.

The plane settles into the bottom of the ocean, everyone becomes remarkably teary-eyed, and Christopher Lee carries an injured passenger past some obvious camera shadows. Then Darren McGavin grabs a handful of soggy shag carpeting.

After a partially successful attempt to release an inflatable raft to the surface, where we're judging the success of the attempt on the ratio of survivors, Christopher Lee's lifeless corpse drifts past the aircraft's windows, causing someone to offer an inconsolable Lee Grant a beverage, and by that I mean they forcefully pour the contents of a mini bottle of J&B down her throat. Lee Grant somnambulantly tries to open the door of the plane, and Brenda Vaccaro decks her, keeping the remaining passengers alive for a few minutes. 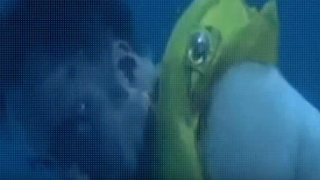 Suddenly, the navy shows up, and Mrs. Deathrage comments on the rescuers' short-shorts. The threat that a coxswain might appear is very real. 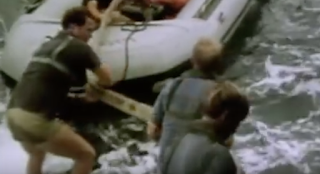 Meanwhile, the survivors in the plane break out in a sweat, but I doubt it has anything to do with the short-shorts.

The film ends in a clown-car like fashion, where dozens of people escape the re-sinking of the plane in a frantic fashion, most of whom I don't recall seeing in the previous two-hours of film while Jimmy Stewart looks off into the distance with a look on his face as though he's pinched a nerve.

Featuring some fairly convincing underwater footage and startling special effects where several Academy Award winners and nominees are threatened with actual drowning, Airport '77 is surprisingly watchable for something so awful. Lee Grant is magnetic throughout, and is compelling even when the script isn't. Not to be outdone, Olivia De Havilland's blue eyeshadow and oversized sunglasses should have been nominated for dueling Supporting Actor Oscars.