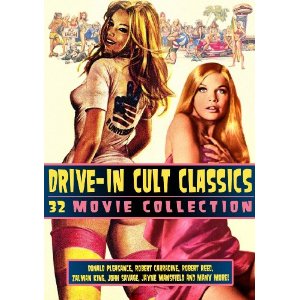 A masked villain plays chicken on the highway, buries a youngster in concrete, and knocks people unconscious in this not-very-thrilling thriller. There are plastic spiders, a cobweb covered wild west ghost town, various sedans, lots of sweaters, some 30-year old teenagers with a Sal Mineo/Frankie Avalon vibe who fall down a lot, several unconvincing fight scenes, a door-related continuity error, and a little male-on-male hair pulling. It's reminiscent of the Val Lewton thrillers of the 40's if those sucked, and it's terrifying if you're terrified of things that are boring. I watched it on the DVD set called 32 Drive-In Cult Classics, and by watching it I mean I nodded off several times but that was probably the Joseph Campbell kicking in. Here's a clip from the beginning of the movie that has a lot of promise that the rest of the film fails to live up to.