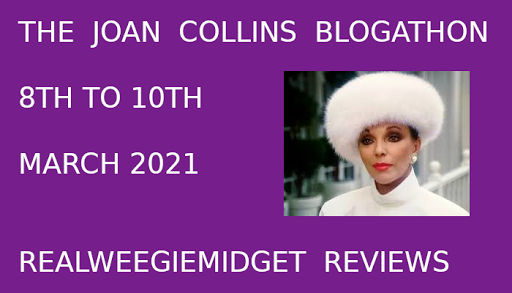 I'd like to begin this post by thanking RealweegieMidget Reviews for inviting me to this blogathon. Even though I have very little knowledge of the career of Joan Collins and I often completely disregard the movie I'm reviewing anyway, it's always nice to be included. And with every one of my blogathon blogposts, I'm convinced this will be the last one anyone invites me to. So thanks again, and let's get this wagon train a-rollin'. 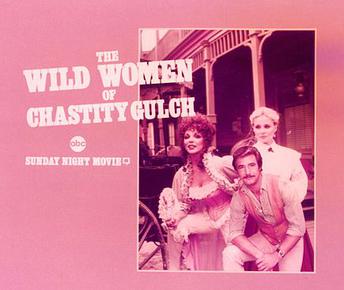 The Wild Women Of Chastity Gulch

Ok, before we get to the review, let me explain a few things, because this wouldn't be a Stabford review without a couple of ducks, dodges, parries, and turns before I get really, really off-track.
At the beginning of 2021, IRL I decided to quit my job of 15 years and start in a completely new industry which requires licensing and lots and lots of studying. As usual, even though I knew about the blogathon for months, I was unable to watch the movie until a few minutes before the blogathon was supposed to begin. I also came to the unexpected realization that the entire film is unavailable for streaming, and only 30 minutes of it is anywhere, and it's a dreadful VHS rip, with atrocious image quality and tracking lines and image rolling. That certainly didn't stop me from enjoying the movie thoroughly in an it's-so-bad-it's-good kind of way because if you're going to watch something awful, you might as well pull out all the stops, hold your nose and jump in, and that's just how I roll.
So back to the review.

The Wild Women Of Chastity Gulch 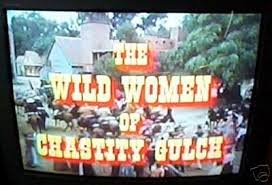 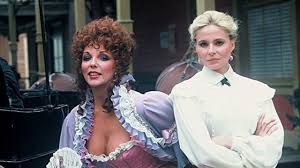 So, like I said a minute ago, I only watched 30 minutes of the film, which is one of those early-80s Aaron Spelling Sunday Night TV-movies, and the fact it's an Aaron Spelling Production is probably the only reason it was made and broadcast at all, since from what I can tell The Wild Women Of Chastity Gulch's plot consists of only a lurid title, extravagantly frilly gowns, and cleavage.
The setting of the film is a town in either Civil War-era Missouri or an amusement park in Southern California I guess, and all the menfolk are off fighting in the war, leaving the town empty except for about two dozen working ladies in the town's brothel and inexplicably, Donny Osmond.

In the brief clip I watched, the movie opens with poor Joan Collins catching a terminal case of vague heart-related death. Immaculately costumed, hair and purple eyeshadow on point, Joan Collins looks fantastic for someone wasting away, which I certainly can find no fault in. When I kick the bucket, at my funeral I'll need video screens, lasers, a backdrop, a DJ, and one of those grocery store "all occasion" cakes with huge, blue frosting roses on it where a touching and sentimental reminiscence about my life is written on it in gorgeous script. 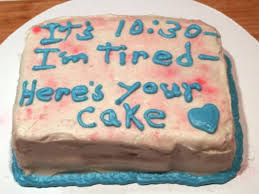 So, speaking of fatigued cakes, Joan Collins breathily asks for a gin from her vaguely germanic caretaker, which reminds me of an unrelated Teutonic Titwillow.

Then Joan Collins looks longingly into a hand mirror before expiring offscreen, and someone says, "Her heart gave out on her, Betsy. She's dead.", and I totally get it. I'm gonna check my look before checking out, too. I absolutely refuse to go gentle into that good night without looking my very best, although I might swoon on a chaise lounge for effect.

Joan's very watchable, and I almost wish I could've seen more of her performance, but that would probably mean watching more of this movie, which plays like a low-budget Aaron Spelling Production of Donny and Marie's (minus Marie) Matt Houston's Gone With The Wind, and wow, that's sounds unappealing, and it was appalling to type out in words.

Speaking of Donny and Marie, some more movie happens although I kind of wished it wouldn't, and suddenly Donny Osmond plays a wounded soldier being nursed back to health in the brothel. He gives a breathy, dramatic performance that bewilders and has a chaste kiss with Blair from Facts Of Life.

If you've been wondering why Donny Osmond never got more dramatic roles, this movie might be the reason.

Speaking of the movie, more of it happens, unfortunately. The livery stable burns, pistols are pulled from décolletage, there's some target practice in ruffled gowns to stretch for time, and soldiers look off pensively into the distance. The print I watched stuttered and skipped during a key scene which culminated in Three's Company's Priscilla Barnes throwing her body across the freshly dug grave of Joan Collins' character, and it honestly couldn't have been more perfect. 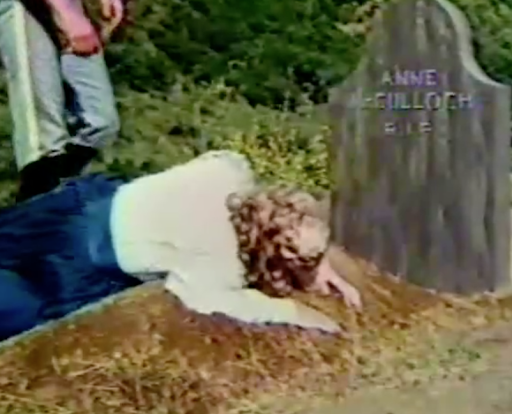 I don't blame you one bit, Priscilla Barnes. Not one bit.

The sets look a lot like Knott's Berry Farm, and the music sounds like what would happen if Charlie's Angels was set in Gettysburg. Speaking of Knott's Berry Farm, there's a not-quite-thrilling action sequence with cowboys falling off horses, soldiers being dragged by horses, and horses jumping over wagons with pistol-packin' Old West prostitutes cowering under them, and let's just say it all seemed a little less than genuine.

Speaking of something being a little bit country and a little bit rock-n-roll, this bit needs another Donny and Marie clip. If there's anything people clamor for in their movie reviews of Joan Collins, if it isn't Donny and Marie, then I don't know what. Do we have another clip? Oh yes. Yes we do.

Like I said, in the print I watched, Joan Collins is in the movie for 30 seconds. That's ok, sometimes actors can make a huge impact in a very brief appearance, like that time on Will and Grace when Joan Collins stuffed tacos in her face and was covered in guacamole.

It takes a lot of bravery to go against type and allow yourself to be seen outside an image of glamour and sophistication for laughs, so this appearance in Will and Grace always stuck with me.

Anyway, The Wild Women Of Chastity Gulch was hardly wild. It was filled with horses, transient southern accents, and plunging necklines, and it should be avoided.

Thanks again to RealweegieMidget Reviews for allowing me to participate in the Joan Collins Blogathon!

Looking forward to the next one!
I've got a few videos over at Youtube through Cultured Vultures if you like these sorts of reviews, so check 'em out if you want. 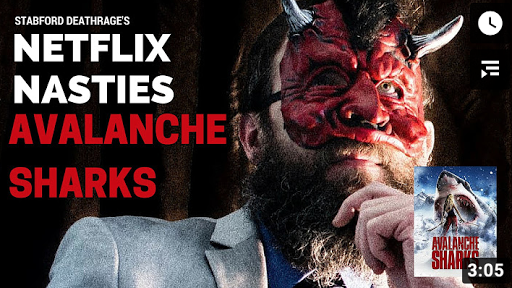