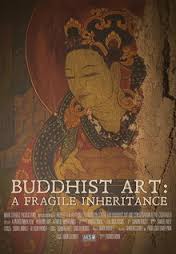 The preservation of deteriorating Buddhist art is examined in this well-shot documentary. Threatened by both natural and manmade dangers, vulnerable ancient paintings are crumbling into dust from wind, sand, flood, fire, earthquake, salt deposits, and the very act of restoration itself. The devotional art appearing in this documentary is created with 'a pure mind for the greater good', often examining the impermanence of life and its rebirth, and uses ancient illustrations as a guide. The depiction of the gods and saints must be accurate, and the requirements cannot be modified. Therefore, its preservation for future generations is imperative. Through conservation techniques such as salt removal, plaster replacement, reattaching crumbling frescoes with adhesives, and the limiting of tourists to remote religious sites, the race to salvage irreplaceable artwork is shown. Featuring beautifully shot vistas of mountainous terrain, colorful traditional garments, gorgeous temples, twirling prayer wheels, and an intricate dance which destroys evil spirits and generates spiritual benefits to onlookers, Buddhist Art: A Fragile Inheritance is an enlightening look at a serious problem threatening priceless cultural artifacts.

ICYMI, I said dumb stuff about the horror film They're Watching over at Cultured Vultures. 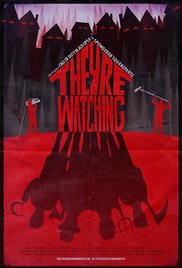 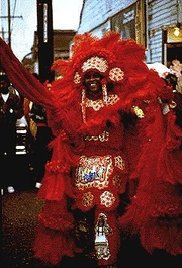 The music and culture of New Orleans is examined in this cheeky documentary. Colorful and humorously shot, Louisiana culture is on display, with a jazz funeral procession, musical performances, singing, dancing, marching, as fellas the glorious folk art. of the region. Andouille, ham hocks, and red beans are prepared. Allan Toussaint and Irma Thomas are interviewed, and Professor Longhair and the Neville Brothers perform. Legba is briefly mentioned. And of course, crawfish are boiled. A surprisingly whimsical film, a little girl whizzes by on a skateboard, and the ornate and meaningful costumes of the Wild Tchoupitoulas are created. Gorgeous and joyous, don't pass up Always For Pleasure.


Speaking of passing up something pleasurable, don't forget to check out my review of They're Watching at Cultured Vultures. I can't really guarantee watching the film or my review will be that pleasurable, though.
Posted by Stabford Deathrage at 10:43 AM No comments: 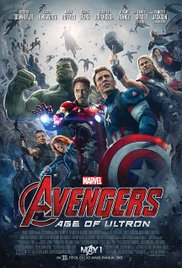 Bickering heroes team up to avert a world decimating threat in this entertaining, uneven comic book film. Jumping into the action immediately with a breathless opening sequence, Avengers: The Age Of Ultron wastes no time bringing the viewer up to speed, as though you just received the latest issue of the comic book. Unfortunately, the pace makes action-free scenes plod along, such as the Stark/Banner montage of the origin of Ultron and a dreary party scene.

Thrilling and boring in equal measures, Avengers: Age Of Ultron has the very best CGI there is to offer, a hint of characterization, an over-the-top ending featuring hundreds of robots and a levitating city threatening to crash to extinguish all life on Earth and justifying assembling all these heroes, and a relatively high ratio of Avengers-based destruction. You know, Ultron kind of has a point, that the Avengers often seem like a more immediate threat to life and property than Scarlet Witch and Quicksilver, well, other than that whole hovering city business.

Anyway, Avengers: Age Of Ultron wasn't half bad, which is more than can be said for Batman Vs. Superman: Dawn Of Justice.


ICYMI, I said a bunch of stuff at Cultured Vultures, and I have a Youtube channel you should check out. 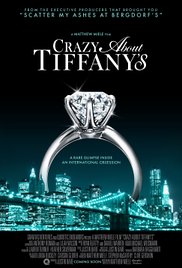 Celebrities, authors, philanthropists and other wealthy people gush over the luxury brand in this well-shot, slick, and extremely tasteful, feature-length advertisement. Examining the history of the iconic store and high-end jeweler, from the origin of the robin's egg blue color used exclusively in its packaging, the world's first catalog The Blue Book, the design and creation of expensive jewelry, and clips from the film "Breakfast At Tiffany's", Crazy About Tiffany's looks very expensive, and the music licensing must've cost a fortune (or at least a few comped blue bags of trinkets).

At the 32-minute mark, there's the first mention of non-wealth, as if there is somehow a world beyond the glittering precious metals sold in the store. Don't worry, it's very brief.

Suddenly, everyone onscreen is somehow surprised to discover the Holly Golightly character in Truman Copote's story is a prostitute. Meanwhile, young girls are indoctrinated into the Tiffany cult. A diamond mine is briefly shown from a distance. No actual mine workers were shown because they probably don't really exist.

At 48 minutes, during a clip of the romantic comedy Sweet Home Alabama, amidst swelling saccharine strings, Patrick Dempsey proposes to Reese Witherspoon in an after-hours Tiffany's as less-than-excited, probably-not-actual employees stand around to wait on them hand-and-foot. I suddenly felt quite queasy.

At 50 minutes, weak criticism is introduced that suggests the brand could be considered passe amongst millennials who feel the store might be stuffy and old-fashioned, but it's quickly pushed aside for more self-promotion.

A beautifully shot, awful, congratulatory corporate cheerleading film with deliriously squealing celebrity shills, Crazy About Tiffany's is just as polished as its overpriced baubles, but that doesn't mean you should buy into it.