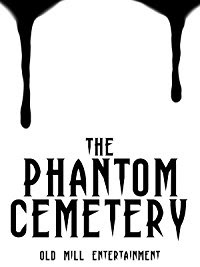 He seems like a nice enough fellow. He just happens to look a little like The Phantom Stranger, except not nearly as cool. Who, you ask? Just hold your horses, we'll get to that. 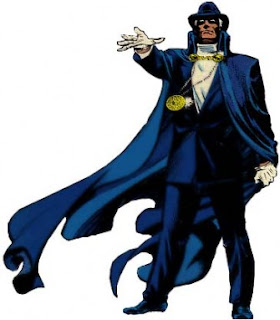 Phantom Stranger is one of my very favorite comic book characters who never seem to ever really do anything (See also the original Mr. Terrific, the original Red Tornado). Spooky and omnipotent, PS lurks in the upper corner of his own comic books, narrating the goings-on, but rarely getting his gloves dirty. 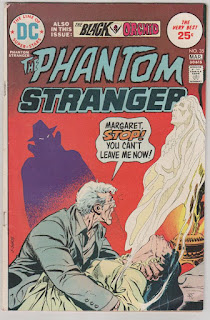 When worlds are threatened, he spontaneously shows up, spouts some heavy mumbo-jumbo, and splits. It's pretty cool, but frustrating.


Amazon is being haunted by a whole slew of speculative documentaries with alluring titles such as Medieval Paranormal Activity, The Legend Of Borley Church, Paranormal Confessions, and Castle Of Lost Souls, and they all seem to be hosted by this guy who looks like Phantom Stranger, paranormal investigator Chris Halton. 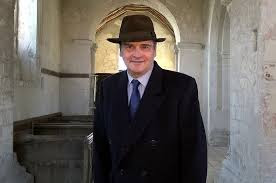 See what I mean?

Castle Of Lost Souls has the intriguing synopsis of an alleged haunting in Saint Briavels Castle, built around 1075, which apparently has dark corridors and dank dungeons where all sorts of tortures, hangings, decapitations, and other horrors have occurred. In spite of watching a majority of the documentary, I don't recall seeing any of corridors, dungeons, or tortures. Paranormal Confessions features a synopsis surrounding a double axe murder at an ancient water mill in the year 1698, where the victims were hog tied to a beam and then butchered. Again, no recollection of seeing any of that.


Anyway, Chris Halton goes to all these supposedly haunted sites, talks a lot, and very little happens, then I fall asleep, slumped over in my chair, usually with a belly full of macaroni and cheese.

So back to the doc, The Phantom Cemetery features Mr. Halton investigating the infamous Bachelor's Grove Cemetery in Chicago, which is said to be haunted by a lady in white. He walks around in the woods, talking about various feelings and impressions he receives. At one point he complains about a negative smell. (Side note: I watch these programs with subtitles, and the subtitle said, "Crossed their pants" which seems to allude to the smells, and that seems fine to me). After many scenes of walking through a forest, he looks at an algae covered swamp, said that the swamp is dead, and a bullfrog jumps out of the water. In spite of the sudden appearance of the frog, I fell asleep.

Chris Halton seems genuinely interested in the history of each location, and in spite of a similar appearance to a certain spectral comic book character, seems like an affable guy. His delivery is profoundly dry, which could prompt a late-night audience with a full belly in a comfy chair to unexpectedly nod off.

Sorry, can't seem to locate trailers for these documentaries, but here's a little something. 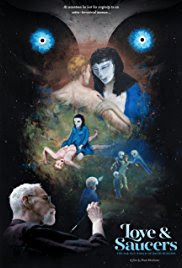 A VHS enthusiast creates explicit paintings of his multi-decade romance with an extraterrestrial in this disturbing documentary.

Between clips of the classic horror films Son Of Frankenstein and the Uninvited, rather alarming, crudely rendered oil paintings of alien encounters are shown which explores the alleged, unconventional relationship between the painter and a sturdy female extraterrestrial. Some of the highlights include a painting of a figure in the woods surrounded by classic aliens wearing blue jumpsuits, another painting of a young boy looking through the foundation of a house to the legs of aliens wearing blue jumpsuits lurking outside, and one of a woman inserting a rod into the artist's nose.

Difficult to watch but nearly impossible to turn away from, Love And Saucers explores a disquieting viewpoint of a UFO enthusiast subset, one which claims ongoing extraterrestrial contact and arguably "beneficial" inter-species physical relationships, where each encounter grows more outlandish and elaborate with each rendering. Fans of outsider art and Forteana may enjoy the documentary, others will find it off-putting.

Speaking of Forteana and off-putting subject matter, I said a bunch of stuff over at Cultured Vultures about the speculative documentary Discovering Bigfoot, where I made several jokes about apples and Bigfoot excrement. Check it out if you're into that sort of thing. 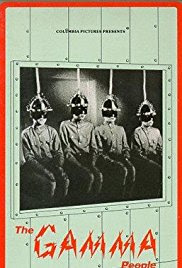 A car uncouples from a train, and curiously overalled children divert it to an isolated, mountainous country named Gudavia, a land where no trains ever come. The only two passengers on the train car, a boorish American and a stuffy Brit, are apprehended and thrown into a dungeon-like prison for being spies. Meanwhile, scientists in satin jumpsuits armed with an enormous laser gun scientifically impregnate human subjects dressed in odd military garb with electricity, turning them into idiots.

The two men are abruptly released, but they cannot leave the country because Gudavia's sole automobile is being used for official Gudavian business out of the country, which sounds fine. The Brit attempts to send a telegram, but it can't be sent because telegrams are only sent on special occasions. A young girl plays the piano as an oddly Aryan young man scowls.


Suddenly, there is a hubbub in the streets, and an old dude says, "In the end, the murdering will cease", because of course he does, and a guy with an extravagant hat chalks it all up to hysteria. In spite of the hubbub, the hysteria, and the murdering, the Brit wonders aloud about identity of his milliner. Somnambulant figures sneak up on the Brit, and they scatter after someone blows a whistle.


The pair meets up with a scientist with a double identity. This mysterious scientist pulled a disappearing act some time ago due to some sort of political thing (hint-hint, nudge-nudge), and he says some stuff about gamma rays. They then meet a Frau, who has children making monster masks for an upcoming festival, and there's almost nothing sinister about that at all.


Some stuff happens. The Brit chases a boy and falls in some water, the zombie guys throw rocks, a mule makes an appearance, and several people fall off a cliff.

The carnival that is certainly not a special occasion and that was forbidden to happen happens, and it's pretty freaked out, which means it's pretty cool, and the festival-goers wear giant monster heads, which I'm always a big fan of. Don't worry, since it's not too bad it only lasts a couple of minutes.

The Gamma People is a comic thriller, and it isn't particularly comic or thrilling.