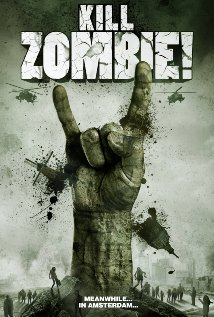 A Russian Satellite crashes into a building, starting a zombie apocalypse in this silly horror/comedy.

A guy gets fired, threatened at a pool party, and thrown in jail. After fireballs crash to Earth, the guy, his brother, and the two threatening fellows escape jail, only to find ravenous zombies are shuffling through town. A girl he went on one date with is in danger and keeps calling him asking for help, so needless to say he fights his way back to town to save her.

Borrowing from Shawn Of The Dead, Dawn Of The Dead, Die Hard, The Matrix, and Aliens, there's lots of blood, green goo, mangled body parts, severed heads, and a cake and a half. One scene is supposed to be taking place at an abandoned gas station, but cars are visibly traveling on a nearby highway, and the cameraman realizes too late and gets it in the shot, however it could be argued that those are supposed to be people fleeing the city as instead of a continuity error. Speaking of continuity errors, the camera crew and equipment are sometimes visible in reflective surfaces. The zombies featured aren't especially scary, they're more of the average by-stander covered in fake blood type.

Fun fact: trypophobics should avoid Kill Zombie, as there's lots of holes. What's trypophobia, you ask? I wasn't sure myself, so I looked it up on Wikipedia. While not recognized by the DSM, it's the fear of holes, usually on skin, often in irregular patterns or clusters, but sometimes people fear lotus seeds, too. 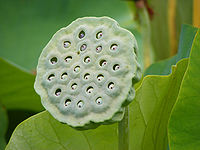 I was skeptical, and in fact one psychologist said it could come from priming or conditioning. I can honestly say I doubt I've ever been conditioned to feel anxious at the sight of holes. So, I looked it up on Google Images, and that was a mistake. I wouldn't say I'm fearful of these images, but I was surprised by the amount of fascination and revulsion I felt, even with all the photoshop. 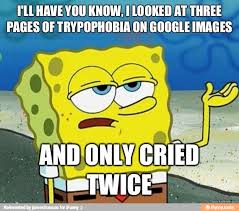 I was going to be a real joker and post some of the more cringe-inducing trypophobia photos, but I decided against it. Knowing a little bit about human nature and being very, very lazy, the curiosity will be too much for you, and you'll end up Googling it yourself, so it saves me a bit of time. 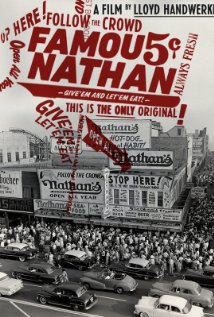 The founder of the Coney Island hot dog stand is examined in this documentary. Featuring footage of Coney Island, old photos, home movies of family members, and interviews with former workers, I had a difficult time remembering who was mad at whom. Family members were often reluctant to speak on the record about Nathan Handwerker, sometimes making contradictory statements to the previously interviewed person, rendering it difficult to get a reading on the chain's founder. One former worker talked about working the line while on LSD, and recounted a legend where it was alleged that someone laced the mustard pots with acid, which forced the stand to replace the old wooded sticks meant to smear the dogs with condiments to the now-ubiquitous plastic packets.

A couple of years ago, I went to Coney Island for the Coney Island Film Festival, and almost missed my screening because I waited in line for a half and hour for some soggy, lackluster Nathan's fries. I'm not particularly sorry I stopped at Nathan's, but watching the documentary made me nostalgic for the lightning-quick, old-fashioned hot dog stand experience that must have awed Coney Island visitors at the original Nathan's.

Anyway, after selling 500 million dogs, the company went through changes, and suffered a decline that mirrored the one that plagued Coney Island itself. Famous Nathan felt overlong, probably due to the abundance of interviews that became confusing. Still, it was nice to see vintage footage of the stand and Coney Island during its heyday. 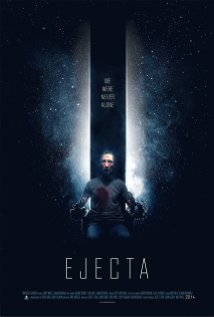 After a coronal mass ejection, a man is tortured and interrogated by a mysterious agency about his abduction by aliens 40 years prior in this intriguing sic-fi film from the writer of Pontypool. Featuring night vision camera footage, shaky cam, transmission feed breakups, and other effects from the 'found footage' genre, Ejecta ultimately raises some interesting questions about torture, control, the act of forgetting, and a thought-provoking, frightening notion of alien-assisted immortality. Although some of the special effects are limited by the film's low budget, there's plenty of alien goo, dissections, gore, and metallic alien torture devices. While not as effective as the zombie film Pontypool, I still ended up enjoying it, and being a little haunted by the final scene. 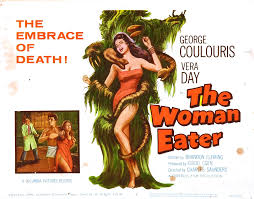 A mad scientist feeds women to an unconvincing plant-creature in this boring horror film.

A man wearing a loincloth plays bongos in a dungeon laboratory because why not, and a woman sways as though hypnotized while standing before a shaggy, leafy surfboard with rubber gloves for hands. The bongo guy shoves her into the clutches of the plant-like surfboard creature, which seems fine. 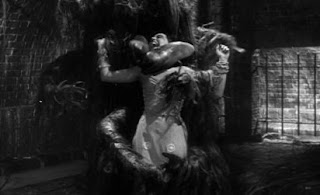 Suddenly, there's stock footage of the Amazon and the various flora and fauna that dwells there, then explorers chop through foliage that's definitely not in the Amazon but probably a soundstage in England. Then with very little warning, there's more bongos. The explorers stumble upon a strange jungle ritual, and by "strange" I really mean "boring and exploitative", and then there's even more bongos.

The bongo guy trades in his loincloth for a lab coat, and he helps inject a partially submerged and striated heart with a syringe, but the heart looks a little like the meat on a slowly turning spit you might find at a shawarma restaurant, and the scientist is unimpressed with the way it's pulsating. I don't know a lot about injecting pulsating hearts with plant fluid, but I do enjoy a good shawarma sandwich, and I really don't find it very appetizing when my sandwich is pulsating. 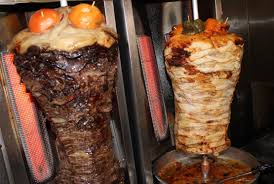 My life has been in complete turmoil since my favorite shawarma restaurant closed down a couple of years ago, and probably also since becoming vegetarian. I can't be certain that one didn't cause the other, but that's not important right now. The restaurant was dusty, and it was attached to a market filled with many expired food items. In fact, you had to blow a layer of dust off the canned goods just to find the expiration date. I'm not certain when the grill was cleaned last. The atmosphere was filled with the aroma of an unknown vegetable that has fallen behind something and liquefied, and no one has been able to find it. However, the most disturbing aspect of all was the enormous photograph of the owner, blown up to 6-foot by 6-foot in size, which hung directly over the owner's desk, which sat inexplicably near where you ordered your sandwiches. It was a little startling to see this huge, unnerving photo of a guy, who you would guess to be some mustached poet from the 1970s, but he's sitting directly underneath it, blinking at you while you're trying to order lunch, sometimes entering numbers on an adding machine. But in spite of all this, the sandwich they made was sublime, with the canned pickles, and the creamy garlic sauce, and the spicy hot sauce. In fact, I'm filled with rage that it doesn't exist anymore, and since it was made from chicken, I can't eat it either.

Anyway, back to the movie. Suddenly there's a funfair with carnival rides, a slightly important to the plot shooting gallery game, and a very important to the plot dancing girl. Blogger's autocorrect attempted to change "funfair" to "unfair", and I agree that it's very unfair I can't go the the funfair or get that shawarma sandwich since I'm now obsessed with the memory of it, but to be fair, I'm often obsessed by the thought of funfairs or sandwiches of some type or another.

Anyway, the story develops for a while, with a mechanic love interest, and a jealous housekeeper, and terrible draperies, and it's not very interesting. Very few women get eaten, but several get hugged.

The Woman Eater bores whenever The Woman Eater isn't onscreen, which is 90% of the movie. They probably should have called the film, "A Guy Dressed As A Fuzzy Surfboard Hugs Women To Bongo Accompaniment, But For Only About 10 Minutes Or So, Which Is Kind Of A Rip-Off Considering The Run-Time", but while technically correct, that title is probably too long for a marquee.