New Wave: Dare To Be Different 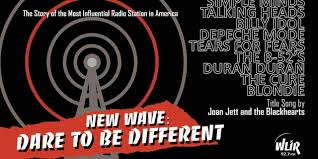 Long-time readers of this blog will note that it is often my modus operandi to obfuscate and distract from my complete absence of knowledge on any number of subjects, my lack of human emotion, and my obsessive need to avoid reflection and contemplation through the act of posting a music video. Expect an abundance of the same with this review.

Let's get this whole business about the phrase "New Wave" out of the way. An appropriate catch-all misnomer applied to a disparate number of musical groups, it seemingly describes a genre no band was ever a part of. If used to describe the biggest wave of British groups to hit the Billboard charts since the Beatles, and the wave of North American acts shrugging off the shackles of classic rock tropes, the term fits. Unfortunately, the term has also been saddled with an implied insignificance, and coupled with unfortunate sexism and bigotry: New Wave artists dressed in frilly shirts and adorned themselves with outlandish hairstyles, and they produced lightweight pop tunes filigreed with synthesizer embellishments, which were marketed to young girls and homosexuals. If they embraced the term, the artists' careers were a race against the clock, set to expire and molder like white bread. Even the radio station at the center of the film is quick to say it never called itself a New Wave station. In defense of its stance, the film notes the station broke 700 "new music" artists to the tune of 500 million albums sold. Abandoned, neglected, and ridiculed, New Wave is the Rodney Dangerfield of music genres; never getting any respect.


In operation since the 1950s, WLIR shed their classic rock image, and according to their tagline, dared to be different by buying British import records and playing them on American airwaves, exposing many now-legendary groups to US listeners for the first time. A tiny 3000-watt radio station on Long Island, WLIR was in competition with much larger radio stations in New York, but was miles ahead of them, predicting progressive musical trends and breaking new ground.

Consisting of classic music video clips and interviews with superstars of the era, music producers, industry insiders, and former DJs, New Wave: Dare To Be Different misses very few iconic groups from the era, and features some interesting first-hand stories of making it big from the music groups WLIR helped make world famous.

Some spoiled grapes with interviews from classic rock groups that were cast aside with the new format helps provide a humorous touch of balance.

New Wave: Dare To Be Different is an fascinating, nostalgic look at an oft-maligned musical genre.


Although not at all relative to this subject, check out my review of the speculative documentary Discovering Bigfoot here: