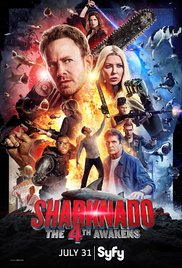 I spent valuable time on July 31st watching the premiere of Sharknado 4 on Sci-Fi, took copious notes, ate dinner, wrote up the notes, and then abandoned the review. Why bother, I thought? I knew Sharknado 4 was going to be terrible. You know it's terrible. Everyone knows it's terrible. Well, in spite of knowing these things, here is the review. Don't forget, some of the stuff I talk about happened that evening, so your results may vary.

5 years after Sharknado 3, which ended enigmatically with the apparent death of the Tara Reid character; Carrot Top, Vince Neil, a ghoulish Wayne Newton are attacked by sharks at a shark-themed hotel in Las Vegas. Why is there a shark-themed hotel in Las Vegas? Who cares, really. Family members are introduced, who may or may not have been in the first films, but none of them are particularly interesting. A newlywed son and his bride attempt a post-nuptial poolside plunge via parachute when threatened by a Vegas dust tornado, which surprisingly enough heads for the shark hotel because of course it does. Chippendales dancers come to the rescue, but too late to save Carrot Top. People scream, run, and unconvincingly die amidst various shark catastrophes, product placement, and celebrity cameos. Meanwhile, I had a disappointing microwave enchilada meal. I knew very good and well it was going to disappoint me, and I begrudgingly ate it anyway, which is exactly how I feel watching this film and we aren't even to the credits yet. Then David Hasselhoff wears a jetpack.

Suddenly, and with very little warning, Gary Busey appears as a mad scientist, and then Tara Reid appears, dragging a suped-up hot rod by a rope because she's now a leather-clad Bionic Woman. She is no Lindsay Wagner.

Things explode, sharks get punched, and I think I'm supposed to know who all these C-list celebrities are. I don't. Then I watched a couple of commercials for Old Spice and POM pomegranate juice, both of which had better special effects and more compelling storylines than any of the Sharknado films.

In a desperate attempt to make anything tornado-related, there's a bouldernado, an oilnado, a lightningnado, and a nuclearnado, none of which are very compelling. Tara Reid and David Hasselhoff both attempt to unconvincingly run, and Stacey Dash attempts to act, and all three needed stunt doubles. Steve Guttenberg shows up promoting his giant tarantula movie driving the car from the film Christine, and sharks get embedded in the world's largest ball of twine.  I'm not sure why.

Suddenly, there's a half-hearted Baywatch reunion, sharks and family members turn into aquatic Russian nesting dolls, a child goes over Niagara Falls in a barrel, Ian Ziering is resuscitated using miniature sharks as defibrillators, and Tara Reid flies and shoots beams from her hands. I'm not sure why.

Sharknado 4 is dumb, boring, tedious, unfocused, and obviously phoned in for cash. Stuff just seems to happen. Just when it seems as though Sci-Fi is going to nail the coffin closed on the franchise, they leave the door open yet again for another installment. Maybe we can all get together and fund a Kickstarter to keep Sci-Fi from making another one.

Check out my review of Little Blue Truck's Halloween at Winkbooks. 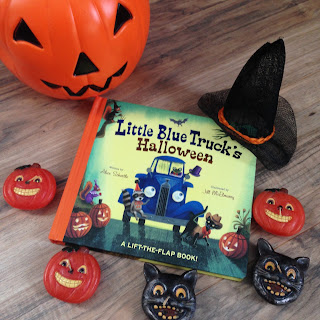 And I said some things about the speculative documentary Bigfoot from 1997 at Cultured Vultures. 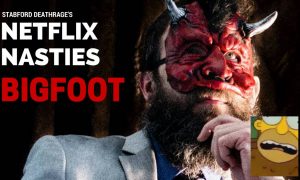 
And I said some unkind things about the Nicolas Cage film The Wicker Man. 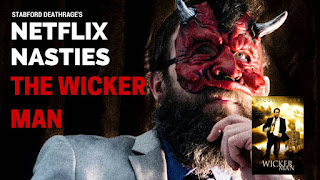